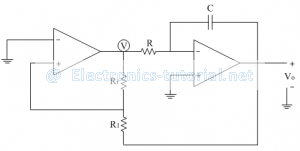 The first op-amp is non-inverting type of Schmitt trigger. Inverting terminal is grounded so Vref = 0V.
The output of first op-amp is voltage V, which is basically a square wave. This output is connected to an ideal integrator. The feedback path is completed as shown in the circuit diagram which defines the magnitude of output triangular wave.
The output of the Schmitt trigger is either +Vsat or –Vsat. The circuit is explained by drawing waveforms at different points.
For a non-inverting Schmitt trigger, the threshold point is given as
±VT=±R1/Rf (Vsat )
Let Rf=KR1
∴VT/Vsat =R1/Rf =R1/KR1 =1/K
Since the saturation voltage is much high compared to VT
∴VT/Vsat <1
∴1/K<1
∴K>1
The following figure shows the signals at the output of the two op-amps. 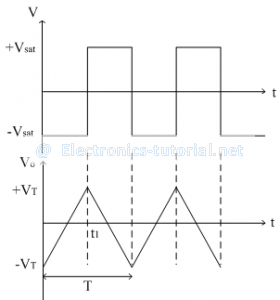