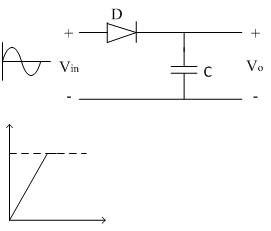 In the positive half cycle, diode D is forward biased and capacitor C starts charging. When input reaches its peak value capacitor gets charged to positive peak value.
In negative half cycle, as input decreases, diode D is reversed biased and capacitor is isolated and holds the peak value of previous cycle. Hence called as peak detector.
But in practice, output is taken across some load RL, so when input voltage decreases capacitor discharges through load RL. To avoid this select RL of very large value so that capacitor discharges very slowly hence almost holds the charge. Whatever charge it lost through RL is gets back in next half cycle.

The diode D is acting as an instant switch, so supply gets loaded.
To avoid the loading while charging capacitor, we use op-amp as follows. Op-amp is placed between input and diode D so loading is avoided as shown in circuit diagram below, 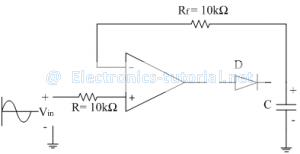 Therefore differential input (Vid) to op-amp is,
Vid=-10-10=-20V=2×V(in peak)
For every op-amp there is a limit for maximum differential input voltage Vid. So care must be taken while selecting op-amp.
The load resistance RL is not possible to have a very large value always, so we use another op-amp as follows,