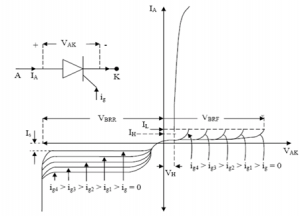 There are three modes of operation for an SCR depending upon the biasing given to it:

Forward blocking mode
In this mode of operation the anode is given a positive potential while the cathode is given a negative voltage keeping the gate at zero potential i.e. disconnected. In this case junction J1 and J3 are forward biased while J2 is reversed biased due to which only a small leakage current flows from the anode to the cathode until the applied voltage reaches its breakover value at which J2 undergoes avalanche breakdown and at this breakover voltage it starts conducting but below breakover voltage it offers very high resistance to the flow of current and is said to be in off state.
Forward conduction mode
SCR can be brought from blocking mode to conduction mode in two ways – either by increasing the voltage across anode to cathode beyond breakover voltage or by applying of positive pulse at gate. Once it starts conducting no more gate voltage is required to maintain it in on state. There is one way to turn it off i.e. Reduce the current flowing through it below a minimum value called holding current.
Reverse blocking mode
SCR are available with reverse blocking capability. Reverse blocking capability adds to the forward voltage drop because of the need to have a long, low doped P1 region. (If one cannot determine which region is P1, a labeled diagram of layers and junctions can help).
Usually, the reverse blocking voltage rating and forward blocking voltage rating are the same. The typical application for reverse blocking SCR is in current source inverters.

A forward biased thyristor is turned on by applying a positive gate voltage between the gate and cathode as shown in figure. Figure below shows the waveforms of the gate current (ig), anode current (iA) and anode cathode voltage (VAK) in an expanded time scale during Turn on. The total switching period being much smaller compared to the cycle time, iA and VAK before and after switching will appear flat. As shown in Figure there is a transition time “tON” from forward off state to forward on state. This transition time is called the thyristor turn of time and can be divided into three separate intervals namely, (i) delay time (td) (ii) rise time (tr) and (iii) spread time (tp). 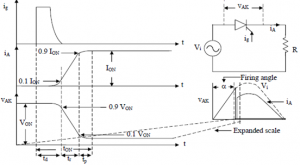 Figure below shows the variation of anode current and anode cathode voltage with time during turn off operation on an expanded scale. Once the thyristor is on, and its anode current is above the latching current level the gate loses control. It can be turned off only by reducing the anode current below holding current. The turn off time tq of a thyristor is defined as the time between the instant anodes current becomes zero and the instant the thyristor regains forward blocking capability. During turn off time, excess minority carriers from all the four layers of the thyristor must be removed. Accordingly tq is divided in to two intervals, the reverse recovery time (trr) and the gate recovery time (tqr). The time interval tq = trr + tgr is called “device turn off time” of the thyristor. No forward voltage should appear across the device before the time t. 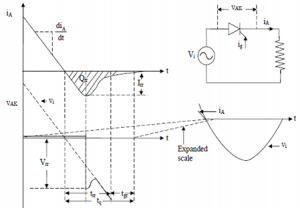