Source transformation is a procedure which transforms one source into another while retaining the terminal characteristics of the original source. Source transformation is based on the concept of equivalence. An equivalent circuit is one whose terminal characteristics remain identical to those of the original circuit. The term equivalence as applied to circuits means an identical effect at the terminals, but not within the equivalent circuits themselves.

From Equations must be true simultaneously for both the circuits for the two sources to be equivalent. We have derived the conditions for equivalence of two circuits shown in Figs. only for two extreme values of R However, the equality relationship holds good for all R as explained below.
Applying KVL to Fig.

If we use KCL for Figure,

Thus two circuits are equal when

Source Shift
The source transformation is possible only in the case of practical sources. i.e

, where Rs and Rp are internal resistances of voltage and current sources respectively. Transformation is not possible for ideal sources and source shifting methods are used for such cases.
Voltage source shift (E-shift):
Consider a part of the network shown in Figure that contains an ideal voltage source. 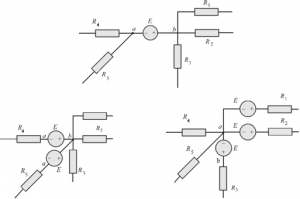 Since node is at a potential E with respect to node a, the network can be redrawn equivalently as in the figures depend on the requirements.
Current source shift (I shift)
In a similar manner, current sources also can be shifted. This can be explained with an example. Consider the network shown in Figure, which contains an ideal current source between nodes a and c. The circuits shown in Figure illustrates the equivalent circuit after the I – shift. 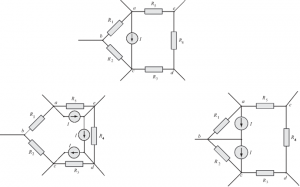 Voltage source shifting :
Consider the partial network shown in Figure. Note that there is no series impedance present in the branch AB in which the source Vx is connected. Hence we can't convert Vx into an equivalent current source.